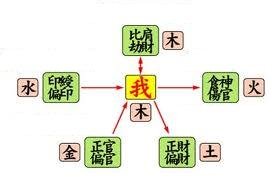 The 10 Gods are the key to opening the door of Chinese Astrology, which is also known as the Four Pillars of Destiny or BaZi. Firstly it is important to bear in mind that the 10 Gods in Bazi are NOT the same as the religious God and do not contain any religious connotations or meanings.

In Chinese characters the God (神Shen) has a few explanations. The most appropriate one to use when trying to explain the 10 Gods in Bazi comes from the I Ching “神也者，妙萬物而為言者也。─《易·說卦”. The direct translation of this is “God shows and speaks the subtle changes of nature” which in other words means “The 10 Gods show and speak the subtle changes between Wu Xing (Five Elements) in Bazi”.

By using the 10 Gods in Bazi it simplifies complex procedures. The 10 Gods not only help to determine the characteristics of the Day Master in the Natal Chart, but also give an indication when reading the Luck Pillars or Decade Pillars.

The 10 Gods are a bit difficult to manage at the beginning. However once you fully understand their meanings you can gain a giant leap into the world of Four Pillars of Destiny. So what are the 10 Gods? The 10 Gods are also known as the Variable Stars and are like the variables in computer programming or the variables between the Five Elements.

The following demonstrates the way – Water enhances Wood, Wood enhances Fire, Fire enhances Earth, Earth enhances Metal and Metal enhances Water. From this cycle a special term is given to any one of the Five elements which enhances another element and this term is RESOURCE.

On the other hand Water is used by the Wood and Wood drains the Water. As a result a special term is given to Wood from the Water point of view. It is called Hurting Officer or Eating God. An easy way to remember this is to think that an Element is eating away!

Direct and Indirect wealth is Money (sometimes debt) to both a male and female chart and it also represents a wife, partner or girlfriend in a male chart.

By employing the Ten Gods in the Four Pillar Natal Chart a Chinese Astrology consultant is able to see the following:

Let’s look at an example:

Smart Meters – Not So Smart!

House Lot Shapes (Get in Shape)

Should You Match Art to Your Furniture, or The Other Way Around?

What Day Is a Good Day For a Haircut

Thankyou! could you please explain further how to relate the four pillars day, month, year, etc. I would appreciate it much 8)

Sorry about being too slow to reply to your question.

It is a very very broad question and needs to be narrowed down a bit more to offer any genuine, well thought through answer.

Shemika,
Not sure if you are referring to the entire website – the bulk of the site is essentially down to Janene Laird with input from others.

If you are referring to the post from Edgar – then yes I agree he has a very clear way of describing things.